So, I’m sad to say after a month and a very quick adjustment to his new home, Bruno has been a poorly Kitty for the last 11 days.

You wouldn’t be able to tell the way he is cosied up in his fave wool blanket right now. 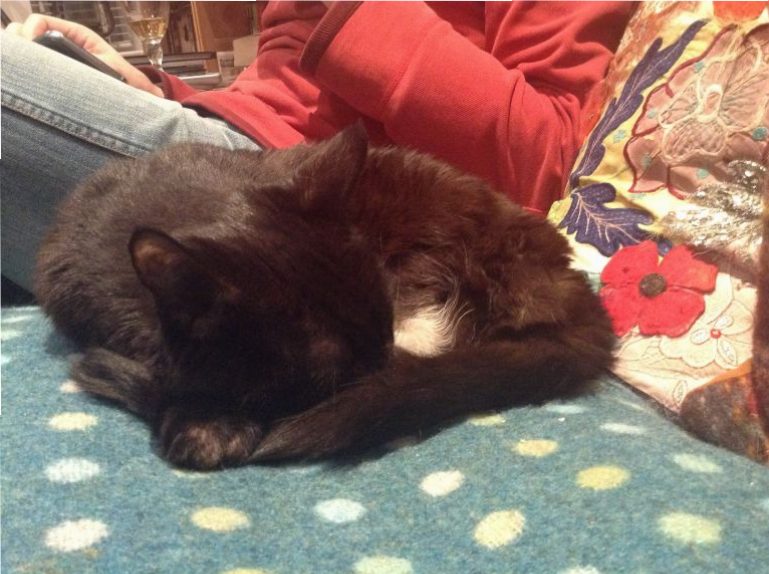 Has anyone else had gut issues with their tripawd? We can’t help but think that his decreased mobility and lopsidedness has made his insides off balance too.

He doesn’t play much (he is five years old) and even the fabled laser pointer doesn’t get him bounding around.

Does this sound familiar to anyone out there? Desperate to find ways to improve things for him.

He suddenly stopped eating and was going to his litter tray, but nothing was happening. Three visits to the vets in three days, a deworming tablet (unnecessary), blood tests (okay for electrolytes and kidneys etc.), Zantac, and a colonic irrigation later, he was home with antibiotics for colonitis and lactulose to keep things moving.

Another 6 days on, a nightmare of feeding him meds, 2 phone calls to the vets and not much success, we go back to the vets.

Poor Bruno now gets a mini enema and more lactulose. Gets things moving, but he’s pretty much off his food despite giving him tuna and fresh cod. He’s interested, and takes a bit from our hand, but just won’t go for it. We don’t know if he’s empty or not pooing 😖

His hydration is OK thankfully as he’s drinking a little cat milk and from his fountain still. Back to vets on Sunday, but we really want to help get his zest back.

Has anyone had similar issues?

Lots of love and hope from J J and Bruno-Baby.

Bruno ate some proper amounts of food – mostly from under his bed, well the spare bed – and used his litter tray! Never been so pleased to clear out poo 💩

Also, he actually slept on top of the bed! Woop woop. It was from underneath the throw which he has made a tunnel into. Back in there now.

The biggest news is that today, after us having our first da back at work, he came over for a stroke, purred and head-butted my legs! Yay! Poor John was in the living room and didn’t want to break the magic so no strokes for him yet, but soon!

Love to all. Xox

It’s been a tough day, Knowing your new friend is having a hard time and not being able to tell them it’s okay and know they understand. There have been a lot of pep chats between John and I and we spent some quiet time near him.

Bruno didn’t eat or drink today either, so I went out and got a cat fountain, to make it more interesting, and some Viyo to help get his nutrients up when he does.

Reading tonnes and trying to work out what’s best. Both of us felt that his spot behind the cardboard under the bed may have actually gotten him stuck. His mobility isn’t great and quadrupeds can get stuck too! We decided to move some of the boxes about 20 minutes ago so that he had space, but was still ‘enclosed’ enough. So worried about leaving him if he was stuck, or disturbing him too much! Argh.

However, he responded well! Cry face. He was interested, not scared, and even popped out to investigate the fountain after I left the room! Still under the bed, but what a relief that he didn’t just stay at the back against the wall! I’m not ashamed to say that John and I are so relieved that we both shed a tear or two.

Glass of champers for NY day and off to bed. Bring on tomorrow 😻

Busy day. Bruno (B) meets us for the first time. B isn’t sure about the other cats so doesn’t come out of his cage, but he does purr and ask for more ear scratches. That’s enough to win us two cat-shocked softies over. Paperwork done and it’s a journey home on the DLR.

After a couple of hours in the bathroom with his igloo bed (which he loves), water bowl, litter tray and us (not the whole time) we move his igloo into the hall.

From there B finds the cardboard under the spare bed and decides that’s his new favourite spot. We decide to leave him be with his water and dry food. A few hours later we think we heard a CRUNCH of biscuits, and he has moved, so we talk to him for a bit and give him his space. The poor wee thing has had it rough and patience is in order.

B might not be ready for bosies (hugs) yet, but that’s okay. We’re just happy he’s here. As long as he eats and drinks we can wait.

Happy New Year everyone and many happy (cat) returns!

About Your Tripawds Blog:

New Tripawds Bloggers: Please review your default first blog post at left for lots of helpful links for getting started with your blog or review the Help Videos in your dashboard. Edit these widgets from your Appearance settings to remove this notice, upload a custom header photo, or choose from 130+ themes, and much more!

Bruno: Our Awesome-sauce Tripawd is brought to you by Tripawds.
HOME » NEWS » BLOGS » FORUMS » CHAT » YOUR PRIVACY » RANDOM BLOG